It's all about the People

not the form or style that make the environment!

We would like to introduce ourselves and our style to you by telling you a bit about that which is most important, the people!

More than just a Sport or just a martial art

We expect Jacky Chan to speak about the advantages of Shaolin Kung Fu but even Samuel L Jackson has openly stated that Shaolin training offers mental and emotional advantages that are not often found in other exercises, sports or Martial Arts. Partially attributed to it's long development time and the fact that it was a Temple not a Village or Killing style, Shaolin Kung Fu was/is designed for peace, health and well-being not violence, war or pain whilst still have a very high degree of efficiency for self defence and self protection. Research has shown that through Shaolin Kung Fu equal emphasis on internal and external physical aspects (Yin & Yang), have unique psychological effects that are substantially greater than those produced by other activities. Studying Shaolin Kung Fu develops your self-confidence and inner calm and there is never a need to be aggressive or violent, even when in a conflict situation. Self Defence and Self Protection starts a long way before ever the first punch or kick; it is in the attitude, knowledge and skill that a Shaolin practitioner projects and displays.

For the fact that the benefits of Shaolin Kung Fu training can achieve the many more outcomes including painless and save exercise, the price is time. It takes longer to be proficient in Shaolin Kung Fu and it takes a bit of thinking to make it work the way you need and want it to. patience and Intelligence are prerequisites for Shaolin Kung Fu.

Shaolin Kung Fu uses Martial Art skills to achieve health, fitness and well-being but it is not a Martial Art!

It all started as a form Yoga and Chi Kung exercise somewhere around 537 CE when an Indian Buddhist introduced the hard form of Yoga and breathing Exercises to the Shaolin Temple for Health and Well being promotion. Times were hard and after loosing their temple, the Shaolin decided that they need to stand up for what they believe, without undue violence, aggression or even damaging the people attacking them and converted their exercises to use Martial Art movements instead.

Over the next 600 years (or so) they developed a style that was suitable for defence along the strict Buddhist lines of non-violence. The 5 Animal style capped off this development around 1100 CE. But this is just a bit of background to how it was developed; if you want to know about the almost 1500 year history of Shaolin and its Training have a look at our Shaolin Temple and it's almost 1500 years of History Page.

We talk about personality types such as Myer-Brigs or the A, B, C & D (and many others). Shaolin Monks realized the need for individual and unique aspects to life-long health & fitness training and expressed this in the form of the 5 Animal Styles. Shaolin Masters understood that one size does not fit all and developed 1000 years before anyone though about it, personality styles. Rather than using obtuse and difficult to understand titles they associated with the Animals in a unique and clever way. The Tiger for the "A" personality type person; Panther for the Strategist and Thinker; Crane for the Socializer and Carer and Snake for the Bureaucrat and Order-Keeper. There is more to this and you can read up on it on our Animal Personality Styles or our Animal Kung Fu Styles pages.

Oldest learning Centers in the World

We often think that some of these very clever tools and discoveries were made by organized and clever people, by universities or by scientific bodies. Where as often the truth is the opposite where the idea and format come from the most unlikely source. the Myer-Brigs Personality Type indicator so much used in hiring people was developed by a Mother-Daughter to find the most suitable partner for the daughter. And one of the oldest forms of understanding human nature was developed by Monks in the middle of China between 4 mountains sometime around the 11th/12th Century.

So, What does this all mean?

It means that it is all about the people not about the style. It is about your personal preferences and needs which define what is best. What is good for one person may be totally wrong for the next, only when you are able to customize and optimize what you do to your current and future needs, will you achieve a lasting and long form of exercise and self defence. So, now that we have cleared that, let us introduce you not to the style but to the people that teach the style.

Hi. My martial art training started when my elder brother took me to his Judo lessons. Although not always regular i continued this from 1962 through to 1970 where we moved to Europe. We were there only 7 months when i joined in the local Karate School under Sensei Arno. During the next 6 years i trained often and regularly learning the language and enjoying the hard form of karate. Only interrupted by my 18 month service in the army, training was 5 times a week. This continued until 1976 where a number of significant events happened; After being runner up in 75, i won the European Full Contact Championship; achieved my Black Sash, my Sensei died in a car crash and i meet my wife to be.

With the death of Sensei Arno the club disintegrated slowly but surly. A good friend of mine 'dragged' me along to this new form of martial art where you don't use strength and striking. This is where i meet Sensei 2nd Dan Christine. Aikido training went on for the next 6 years during which time i married my wife Dagmar and in 78 went back to school to do my Diploma of Electrical Engineering. In 80 i graduated successfully with my Diploma having completed a specialist additional Diploma with the Heinz-Piece Institute of Digital Electronics and Computing.

1982 was again a significant year. The chief instructor of the Aikido style we were doing was scheduled to be in Germany in August. Christine was preparing for her 3rd Dan and 'encouraged' me to go for my first. We did, it was successful and we were honored with Black belts from Sensei Miamoto. Two months later Dagmar and i migrated to Melbourne, Australia.

We were only 6 months in Australia when we both joined in a Kung Fu session. It was fantastic. Not as hard as the karate (Dagmar appreciated that) but allowed me to use my strength (which was a no-no in Aikido). It suited large northern's like us and the 3 Instructors were great especially the Chief Master. All went well for the next 8 years including my involvement as a Judge and Referee in a national martial art circuit. We were both into the style and Dagmar added Tai Chi to her training. It was 1990 that saw the death of my father and this caused problems for me and i caused problems for others. In 1992 we founded the Shaolin Kung Fu Academy, originally called Liang-I Shaolin Lifestyle Kung Fu. You see why we changed it.

Over the next 10 years we ran the club a bit more like a hobby than a real Academy. We had a lot of success along the way including over 50 State and National Martial Art Titles. I was even voted the Best and Fairest Judge & Referee for 1999. It was a fun time and we did a lot of activities. But my dream was to be a full time Martial Art teacher. This opportunity gave itself in the way of Early Retirement from my Leaning and Development position after returning from our Training tour in Shaolin, Henan, China.

Since this time i have been a full time teacher and a part time Actor (for fun and interest). Dagmar has focused more on her professional life and is only involved with the training of seniors and instructors. We now have some exceedingly nice people who are really good at Kung Fu helping us and teaching.

Started with the Academy in 2005. A quiet but very capable martial artist and the nicest person possible. Intelligent, Anthony has a penchant for Shaolin Kung Fu. he is brilliant in understanding, remembering and performing the different Shaolin Styles and has a wicket sparring style. Sifu Anthony was promoted to Black Sash an honored as a Sifu in June 2015. He regularly teaches on Thursdays and trains on Tuesdays in Mordialloc.

Sifu James originally came to us for a change of life. he is a big fella and was not very flexible. Since then, he has made some significant personal, professional and martial art achievements. He has gone back to school and became a personal care worker, his flexibility is significantly improved and aside from level achievements he has successfully specialized in Cannon Fist Boxing. And he is good at it. He is now focused on Iron Body Iron Mind form whilst he teachers our Lion Cubs Kung Fu and assists me in Wednesdays Class. Sifu James is also three times winner of the Student of the Year as well as the firs ever to be awarded the Triple Honored Award.

Martyn was a bit like me in that he joined the Academy after his elder brother Robin was already a member. Actually,it was a family affair with Emily their sister also joining. Robin continued until he was a Red Sash and then he joined the State Emergency Services. Martyn stayed with us achieving two students of the Year Awards, his 1st Degree in Weaponry as well as his full Sifu Accreditation. Martyn is also managing our 2nd venue in Camberwell!

Sifu Douglas initially joined the Academy in 1999 when the Mordialloc venue opened. He had some breaks in his training but always returned. A hard and solid martial artist, Douglas achieved his Weaponry Black Sash together with his Sifu accreditation via Skype. He could not stay for the official presentation needing to be in Japan where he teaches. It seems that he want's to stay Japan and settle down. 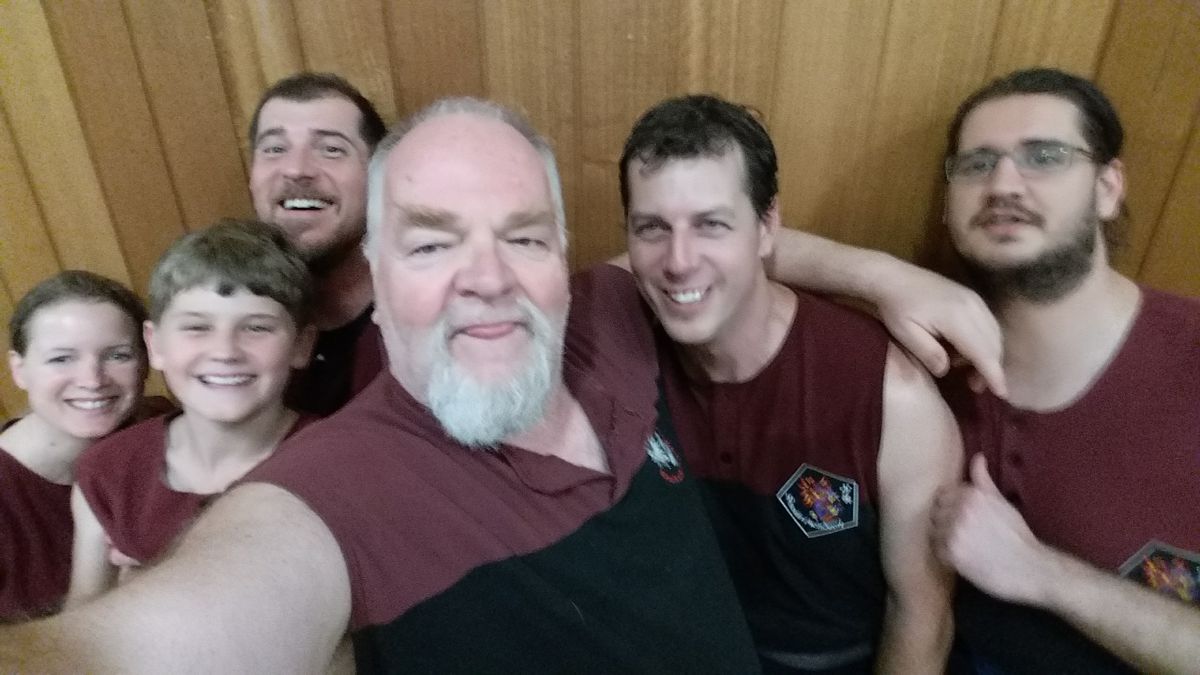 We also have to mention the significant other members who are currently specifically training to become Kung Fu instructors. We have at this time two, Sishon Damon H and Sidi Mathew P. Both look to become exceeding ly capable and good instructors.

We are happy to hear from you and answer you martial art, health and developmental questions. If you wish to train with us, the first 3 sessions are free. It is best to try these before making any commitment. If you have any other questions or would lust like to explore some possibilities, you can;

On this WEB site you will find information about quite a number of Kung Fu Styles, Systems and Techniques as well as complete Style Training Programs (Cyber Training). The Colored Tiles Below are direct links to the pages with the Information and training. The Grayed-out Tiles are the Programs, Styles and Information we are still working on bringing to the WEB. If there is anything in particular you are interested in, let us know; we may have some info on the topic. Write to us at Shaolin Academy; Thank you - Sijo Robert Z